Try to survive and prosper in the newly discovered Vinland (Newfoundland, Canada). Use arrow buttons to move and cast spells with numeric buttons. There are seven levels and then another round. The heart symbol represents health.

In the game you play Leif Eriksson the Viking from Greenland who was the first known European to set foot on North America, before returning to Greenland. Later his brother Torvald reached North America but was killed by the natives. A settlement was founded by Torfinn Karlsämne but the settlement died out after a few years.

The game was submitted to the Historically Accurate Game Jam 5, although not much in the game is historically accurate. Possibly the fauna of Newfoundland is correct.

Quake: Damage monsters based on number of adjacent walls.

Restart: Fresh start of the level.

Flee: Go back in reverse direction.

Power: Extra power in next attack.

The music really nice. It is a bit hard for me, with a lot abilities I don't know what to do.

Fantastic! Way faster than I could do it. 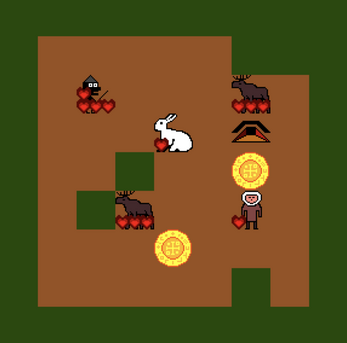