Torsten is a broughlike viking game.

The game is based on a tutorial by Jeremiah Reid, https://nluqo.github.io/broughlike-tutorial/

Control Torsten with A, D, S, W and cast spells with 1-9.  Alternatively, use mouse or touch device. Monsters will spawn initially, once a treasure is collected, and spontaneously at an increasing rate. The green spiral indicates a spawning monster. The purple door is an exit for the next level. Three collected treasures will give you one new spell. You can move walls by walking into them, if the walls are not blocked by another wall or a monster. Health is represented by the red dots at the base of each character. There is no final goal of the game, besides reaching for the high score.

SKELETON moves every other turn

CROC destroys walls and heals by doing so

WOOP warps the player to a random passable tile.

AURA heals both the player and any adjacent monsters.

DASH moves the player in the direction of their last move or attack until they are blocked by a wall or monster.

DIG replaces all walls with floors.

KINGMAKER heals all monsters and generates a treasure on their tile.

ALCHEMY turns all adjacent walls that are not part of the outer wall into floors with a treasure.

POWER makes the next player attack do 6 damage.

BOLT operates in the direction of the player's last move.

CROSS operates in the 4 cardinal directions. 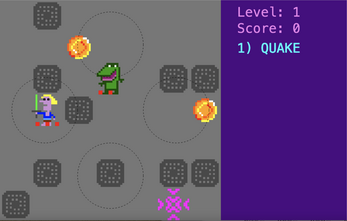